Alpha-lipoic acid (LA) – This substance (also known as thioctic acid) works together with other antioxidants such as Vitamins C and E. LA helps the body to produce energy, and provides support to the liver in removing harmful substances from the body. Some studies indicate that LA assists in preventing cell damage, and removing heavy metals from the bloodstream. Because of its strong detoxifying effects, LA is commonly used in the treatment of Amanita mushroom poisoning, which causes severe liver damage. LA also influences the metabolism of sugar, and can help to keep blood sugar in balance.

Diabetics seem to receive particular benefit from this substance because alpha lipoic acid helps ward off diabetic neuropathy (painful extremities) and retinopathy (a common cause of blindness). LA also helps regulate blood sugar and prevent cardiomyopathy and may even be involved in nerve regeneration. Promising studies are underway to determine its value in retarding the onset of Alzheimer's and Parkinson's Diseases. As a powerful antioxidant, LA can help to neutralize the free radicals within the body that are thought to influence aging processes. LA is both water and fat soluble, so it is easily passed across the blood-brain barrier, and is functional in almost all other parts of the body as well.

Vitamin B12 (cobalamin) – This vitamin in its most common form cyanocobalamin, is broken down to methylcobalamin by the body. It is generally found only in meat and dairy products. In combination with folic acid, B12 is involved in DNA synthesis, production of the myelin sheath that protects nerves, and red blood cell production. As a methyl donor involved in homocysteine metabolism, B12 also plays an important role in immune and nerve function.

B12 deficiency is fairly common in those over 65, and because it is stored in organs, deficiencies can take a very long time, often up to 6 years, to appear. Worse than that, deficiencies of B12 or folic acid (a complementary substance necessary for B12 utilization) can result in significant mental disturbances without any indication of anemia or other clinical indication of deficiency. In patients with B12 deficiency, up to 61% have shown a marked increase in mental capacity when B12 supplements are added to the diet. According to most studies, when B12 is taken orally, it is absorbed at a rate of about 1.2%. Since the body uses about 2 mcg of B12 daily, 200 mcg orally administered will maintain B12 levels at stasis. For those who are deficient, a higher supplementation level will be required.

Vitamin B1 (thiamin) – This vitamin is a coenzyme that, in combination with lipoic acid, is involved in the decarboxylation of pyruvate and the oxidation of alpha keto-glutamic acid. These functions are essential to energy production, metabolism of carbohydrates, and neurotransmitter function. B1 is extremely sensitive to alcohol, sulfites, and tannins found in black tea and coffee and all of these will render B1 ineffective. B1 is water soluble and is not stored in any quantities in the body.

Extreme B1 deficiency, which is rare in most developed countries, causes beriberi, a syndrome whose symptoms include loss of muscle, mental confusion, elevated blood pressure, and edema. Milder deficiencies can cause fatigue, depression, tingling or numbness in the extremities, and constipation. Research in animals indicates that B1 activates membrane ion channels, possibly by phosphorylating them. The flow of electrolytes like sodium and chloride in or out of nerve and muscle cells through membrane ion channels plays a role in nerve impulse conduction and voluntary muscle action.

Vitamin B2 (riboflavin) – This vitamin acts as a cofactor for enzymes involved in metabolism. It is an essential part of FAD (flavin adenine dinucleotide) coenzymes and FMN (flavin mononucleotide). These coenzymes are involved in energy production and the metabolism of protein, fat and carbohydrate, which are essential processes in every cell in the body. They are also cofactors for two important antioxidant enzyme systems – glutathione peroxidase and xanthine oxidase. Riboflavin coenzymes are also important in the cytochrome p450 enzymes, the body's primary detoxification system. B2 works with the other B vitamins and is important for body growth and red cell production. Similar to thiamine, it helps in releasing energy from carbohydrates.

Molybdenum – This is an essential trace mineral. It is crucial in regulating pH balance in the body, which, in turn, directly effects oxygenation of cells and tissues, and the resulting metabolic rate of the body. The need for molybdenum has been established, but there is presently no recommended daily allowance.

N-Acetyl Cystiene (NAC) - This is an amino acid naturally occurring in the body. It is a potent antioxidant that is involved in the maintenance of cholesterol and lipoprotein levels, and functions in combination with natural interferons in the body to enhance immune response. NAC is an amino acid derivative, which has begun to receive increasing attention as a powerful free radical scavenger. This simple compound has an extremely low profile of side effects and helps the body in a variety of ways. It not only enhances the activity of Vitamins C & E, but it also enhances the immune system, improves lung function, helps transport sterol hormones, helps prevent insulin resistance, and prevents ammonia formation. 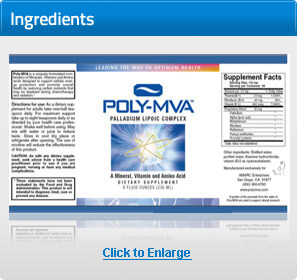