Chelating agents were introduced into medicine as a result of the use of poison gas in World War I. The first widely used chelating agent, the organic dithiol compound dimercaprol (also named British anti-lewisite or BAL), was used as an antidote to the arsenic-based poison gas, lewisite. The sulphur atoms in BAL’s mercaptan groups strongly bond to the arsenic in lewisite, forming a water-soluble compound that entered the bloodstream, allowing it to be removed from the body by the kidneys and liver. BAL had severe side-effects.

During the 1950s after World War II, a large number of US Navy personnel suffered from lead poisoning as a result of their jobs repainting the hulls of ships. The medical use of EDTA (ethylene diamine tetra-acetic acid) was introduced as a lead chelating agent to treat lead poisoning in employees of battery factories and in the sailors who were responsible for painting the ships with lead paint. The patients who received EDTA, which is a synthetic amino acid that works by binding heavy metals and removing them in urine and or excreted in the stool, also had improvements in their circulation. Unlike BAL, EDTA is a synthetic amino acid and contains no mercaptans. EDTA side effects were not considered as severe as BAL.

Since the 1950s, Chelation Therapy has been studied and given to at least 2 million people and shown to be safe and effective for not only binding heavy metals, but in preventing amputations as well as coronary bypass surgeries. There have been rare side effects that typically have to do with fast administration of the chelating agent. 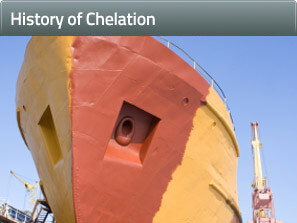