Dr. Merrill Garnett, a doctor and research chemist, is head of the Garnett McKeen Laboratory, in Stony Brook, New York. Dr. Garnett is the inventor and recipient of multiple U.S. patents for palladium lipoic complexes. For nearly 40 years, Dr. Garnett has probed the secrets of molecular biology and the mysteries of cells. He saw cellular dysfunction as the failure of cells to regenerate normally in a default mode; instead, cloning themselves in a deranged state over and over again. He theorized that this failure to mature was a problem of energetics in the cells metabolic processes; the cells energy transport chain which occurs through electron transfer.

Dr. Garnett began the often lonely search to find a molecular compound that would restore healthy pathways for growth and normal development within the cell—pathways missing or deficient in dysfunctional cells. He searched for a natural metallo-organic compound that would act as a molecular shunt to restore the cells healthy energetics. After testing some 20,000 compounds, in 1991 Dr. Garnett developed the biochemical formula that became Poly-MVA. He discovered that palladium combined with lipoic acid, B12 and thiamine created an extremely useful and safe cellular nutrient. Subsequent tests have shown that Poly-MVA is safe, nontoxic, and fast-acting. Dr. Garnett is currently working in cooperation with other researchers to determine the effectiveness of the principal ingredients of Poly-MVA for other uses.

When lipoic acid, a powerful antioxidant with many biological functions, is connected to an electrically charged metal substrate, and joined with various B vitamins, the resulting complex becomes totally soluble in both water and fat. It can easily and safely travel throughout the body and into every cell, crossing the blood-brain barrier as well. Therefore, performing that journey across the blood-brain barrier (impossible even for most drugs, let alone ordinary nutritional supplements) suggests that the nutritional supplement Poly-MVA, may hold great promise in cases where other means of supplementing cell nutrition are ineffective.

In addition to his work with Poly-MVA, Dr. Garnett, with help from his son, Wade, is also developing “electro-active” compounds that destroy certain malignant tumors without damaging healthy cells. The Garnett’s research is based on the theory that all normally developed cells contain an inward directed energy flow. They have looked for those pathways which alter electron flow in the cell, from the point of view that normal development requires normal energy flow. In laboratory experiments, the Garnett’s found that by introducing synthetic mimics of electric pathways, dysfunctional cells are changed selectively, either back to normalcy or they do not survive.

The Poly-MVA dietary supplement, developed by Dr. Garnett, works because healthy cells have “oxygen radical pathways”. Normally, oxygen radicals are formed when fatty acids donate electrons to oxygen. These oxygen radicals have an unpaired electron charge and are unstable. Special proteins, in the mitochondria, convert the oxygen radicals into water and useable energy. At the Garnett McKeen Laboratory in New York, the Garnetts are producing synthetic mimics of electric pathways by introducing palladium lipoic complexes in various combinations into cells.

Palladium lipoic complexes have been extensively tested under laboratory conditions and have been used for more than eight years as a dietary supplement. Animal toxicology and safety studies indicate that palladium lipoic complex is safe even when administered at very high levels. Since Poly-MVA is easily absorbed by the body, most individuals notice a difference in how they feel within 2-4 weeks. Some individuals have seen positive results (energy improvement and increased appetite) within a matter of a few days. 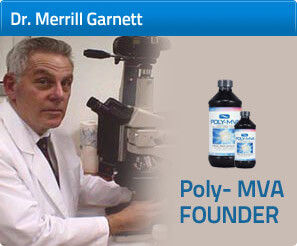